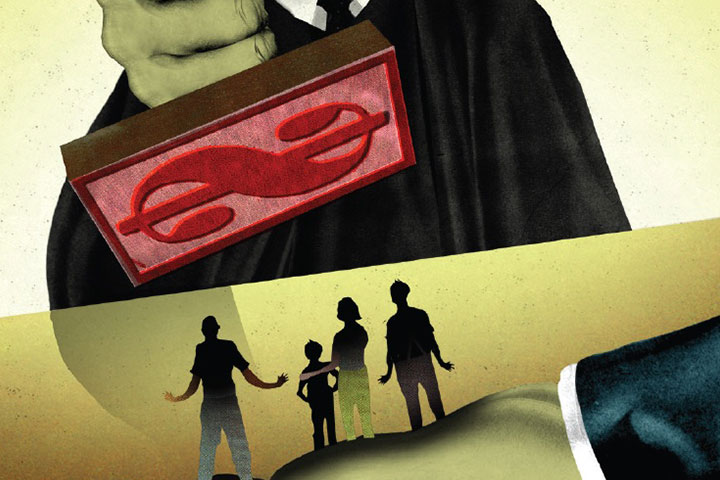 Human Rights Watch released a report in January entitled Rubber Stamp Justice:  U.S. Courts, Debt Buying Corporations and the Poor.  This Report does an excellent job shining a light on problems that legal aid attorneys and their clients have been complaining about for years.

“Every year, several hundred thousand people across the United States are sued by companies they have never done business with and may never have heard of. These firms are called debt buyers and although they have never loaned anyone a penny, millions of Americans owe them money. Debt buyers purchase vast portfolios of bad debts—mostly delinquent credit cards—from lenders who have written them off as a loss. They pay just pennies on the dollar but can go after alleged debtors for the full face value of every debt plus interest at rates that routinely exceed 25 percent.

Debt buyers also rely on tax-funded state institutions—namely the court system—to secure much of their income. Leading debt buyers rank among the heaviest individual users of state court systems across the US, and various legal actions and research, including that of Human Rights Watch, have identified repeated patterns of error and lack of legal compliance in their lawsuits.”

Until recently, little has been done about this abuse of our tax-funded system of justice.  Enter the Consumer Financial Protection Bureau or the CFPB, a creation of the 2010 Dodd–Frank Wall Street Reform and Consumer Protection Act.

Last July, the CFPB teamed up with state Attorney Generals and ordered JP Morgan Chase to Chase to permanently stop all attempts to collect, enforce in court, or sell more than 528,000 consumers’ accounts and pay $50 million in consumer refunds, $136 million in penalties and payments to the CFPB and states, and a $30 million penalty to the Office of the Comptroller of the Currency (OCC).    Chase sold faulty and false debts to third-party collectors, including accounts with unlawfully obtained judgments, inaccurate balances, and paid-off balances.

Last December, the CFPB sued a Georgie law firm and the Court entered an Order barring the firm from churning out Illegal collections lawsuits and ordered a $3.1 million penalty.    “The Hanna firm relied on deception and faulty evidence to coerce consumers into paying debts that often could not be verified or may not be owed,” said CFPB Director Richard Cordray. “Debt collectors that use the court system for purposes of intimidation should reconsider how their practices are harming consumers.

Fines and restitution are important CFPB tools but limits on future conduct are the most important actions taken by the CFPB.  For example:

Debt collectors and debt buyers that abuse the court system now know there is a cop on the beat:  the CFPB.  Is it any wonder that the big banks and others are trying to weaken the CFPB?