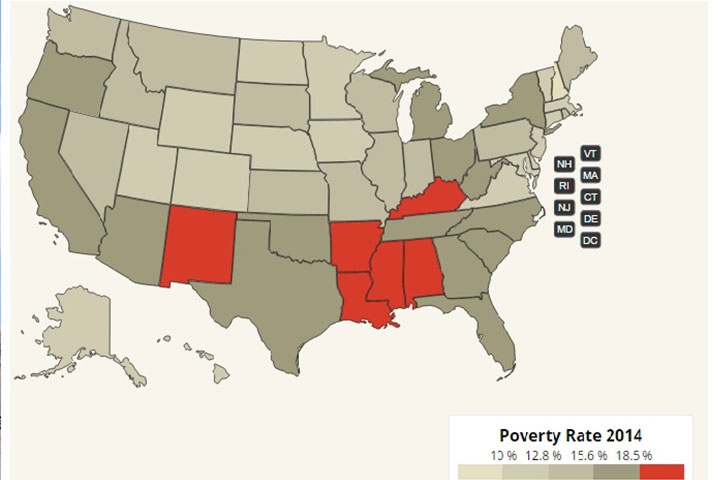 Poverty and Opportunity in Virginia: The Good, the Bad, and the Ugly

Each year, the Center for American Progress releases its “State of the States” report, which evaluates progress toward cutting poverty and increasing opportunity by tracking 15 key indicators in each state.

As this report underscores, policy matters when it comes to addressing poverty and improving economic opportunity. State policymakers have a host of tools at their disposal to bring about change that makes a meaningful difference in the lives of American families.

So, where does Virginia rank?

Where Virginia is Doing best

#1 in Children living apart from parents:  Only 2 children in Virginia lived in foster care for every 1,000 children under age 18 (national average: 5 per 100,000).  Could these favorable numbers be the result of heavy use of “kinship diversion” in Virginia.

Where Virginia is Doing Worst

#38 in Affordable and Available Housing: Virginia had 57 apartments or other units available and affordable for every 100 renter households with income below 50% of median income where they live (same as national average)

By taking a hard look at where their state is succeeding and where it is falling short, advocates, lawmakers, and residents can prioritize future action that would dramatically reduce poverty and increase well-being in their backyard and beyond.  Virginia’s rejection of Medicaid expansion led to our dismal ranking in health insurance coverage.   Poor economic choices by the Virginia General Assembly have led to the near elimination of coverage for Virginia’s unemployed workers.  This comes at a time when many experts say that the nature of work is irrevocably changing, and that workers face a future of more and longer periods of unemployment and underemployment.